Posted by News Desk on 10-6-14 in Local, News | Comments Off on Pokhara six-lane road project in limbo 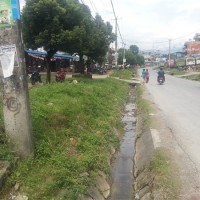 With concerned authorities having failed to go through the due process on time, the proposed construction of a six-lane road in Pokhara has been delayed.

Prabhat Kumar Jha, chief of the RDO, said that the failure of the concerned authorities to remove structures, houses, telephone towers and trees within the designated area has worsened the problem.

Surbir Rai, engineer at the RDO, said that their repeated calls to the Pokhara electricity distributor centre of the Nepal Electricity Authority to remove electricity poles in the area have not been implemented so far. The Kaski district branch of Nepal Telecom and DIO have failed to coordinate with them on expanding the road, he claimed.

Manoj Kumar Singh, chief of the NEA electricity distributor centre, said that they are finding it hard to remove electricity poles in the area because of a budget crunch. We have informed the centre of the problem, he said.

Rai said that a bridge over the Birkhe river should be constructed as well. There are 153 trees, 45 electricity poles, around 45 telephone towers, one-kilometre water canal, four petrol pumps, eight houses and drinking water pipelines on the road, according to data with concerned authorities.

Minister for Physical Planning and Works Bimalendra Nidhi laid foundation stone of the road construction on August 28. The project is estimated at Rs 134 million and is proposed to be completed within two years.