Posted by News Desk on 10-20-14 in News | Comments Off on Dahal playing dual role to hinder constitution: Oli 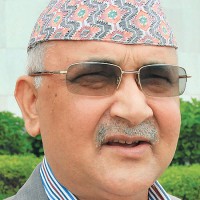 Speaking at a programme organised in the Capital on Monday, Oli alleged that UCPN (M) Chairman Dahal has been conspiring against the formation of the constitution through the CA by January 22. Though Dahal was appointed as the Chairman of High Level Political Committee on condition that he would facilitate the promulgation of new constitution, he has been leading some 2,200 individuals of 22 parties, the UML chairman claimed.

Oli further noted that the nation shouldn’t be separated into many states reiterating his party’s stand of four states. He said that CPN-UML is ready to go for six states for the sake of consensus, however, his party will retreat towards four state structure—Koshi, Rajdhani, Gandaki and Karnali– if the UCPN (M) would not comply to it.

“Even if the Maoists do not agree, we have a clear majority and two-thirds of the vote. We are determined to promulgate the new constitution even with the help of numerical strength,” said Oli.

The UML chairman warned that Dahal would regret his decision later just like he did after deciding to go to the 10-year long people’s war if he doesn’t backtrack from his protests.

On a different note, CPN-UML Chairman Oli said that Prime Minister Sushil Koirala should resign from his post after January 22 even if the new constitution is not drafted within the slated time.