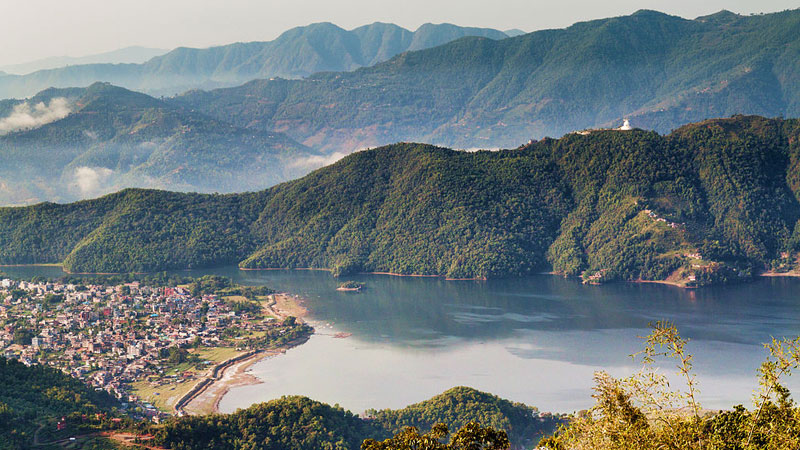 Phewa Taal(Lake) is a freshwater lake situated in the south of the Pokhara Valley. It is the second largest lake in Nepal and the largest in Gandaki Zone followed by Begnas Lake. Phewa Lake resides at an altitude of 742 m (2,434 ft). It covers an area of about 5.23 km2 (2.0 sq mi) with an average depth of about 8.6 m (28 ft) and maximum depth of 24 m (779 ft). The maximum water capacity of the lake is nearly 43,000,000 m3. The Annapurna range on the north is just about 28 km away (linear distance) from the lake. The lake is famous for the reflection of mount Machhapuchhre and other mountain peaks of the Annapurna and Dhaulagiri ranges. The famous Taal Barahi Temple is situated on an island in the lake.

Phewa Lake is one of the major and most important tourist attractions of Pokhara city and the north shore of has been developed into a tourist district, called Lakeside, with hotels, restaurants and bars catering to the tourists and travelers. The water from the lake’s outlet is used to generate electricity. The Phewa Power House is located about 1.5 km (0.93 mi) from the southern part of the Phewa Lake. A part of the lake is also used as commercial caged fisheries.