Posted by News Desk on 10-6-14 in Local, News | Comments Off on Pokhara airport left in oblivion 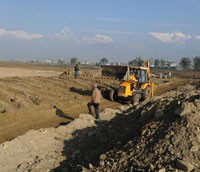 Pokhara Regional International Airport Construction Concern Committee has decided to press the government to begin construction at the earliest.

Pokhara Tourism Council today submitted a memorandum to Prime Minister Sushil Koirala through the CDO, with consensus from the concern committee.

A meeting of the concern committee held today decided to hold a comprehensive meeting with various stakeholders, civil society and mediapersons on October 7. Concern committee Coordinator and Pokhara chapter of Federation of Nepalese Chamber of Commerce and Industry (FNCCI) said that they would announce stern programmes of agitation if needed, after the October 7 meeting. Around 3,132 ropani land was appropriated at Chhinedanda, Pokhara, 39 years ago to build the airport, when Surya Bahadur Thapa was Prime Minister.

Pokhara Tourism Council Chairman Surya Bahadur Bhujel said locals of Pokhara were ready to make sacrifice for the airport as it was related to economic development of the western region.