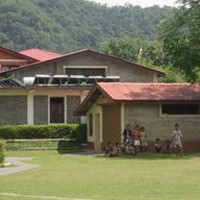 The SOS Children’s Village Pokhara is located in Pokhara valley, to the South West of Pokhara at a place called Chhore-Patan. It is about 3 km from the town’s only airport. Taxis are easily available.

A few thousand Tibetans took refuge in the Northern regions of Nepal in the 1960’s and 70’s. Life as refugees in the far-flung remote, inhospitable and inaccessible region were grim, to say the least. The rag-tag group of refugees struggled each day for survival being reduced to begging and the kindness of the local communities and Government Under the circumstances, the old, weak and children were the worst sufferers of this tragedy. Sensing their terrible plight, the elders forsook their grief as ill fated and hurriedly regrouped to save their young ones. Bare minimum funds were raised trading with whatever they salvage from the disaster. 32 orphan, abandoned and destitute children along with an escort were then sent to the warmer and fairly comfortable environments of Pokhara in early seventies. Latter many children become orphans and semi-orphans by their parents natural death of tuberculosis and complication in child-birth etc. caused by poverty.

Short Description Of The Neighbourhood:

Our immediate neighbor is a fairly large Tibetan Refugee Community of nearly 750 people who have been resettled on a plot of 188 ropanies (.092 Square Kilometre) of land provided by the assistance of the Nepal Red Cross Society in 1966. The Community depends upon traditional Tibetan Carpet Weaving and by selling souvenirs to the tourists.

The children of this Refugee camp attend our SOS Kindergarten and the Hermann Gmeiner Primary and Senior Schools along with our Village children. This intermixing and exposure with the community is of immense mutual benefit to the Village and the Community. Joint social and cultural celebrations have helped to continue in the customs of the past. Besides, the local Nepali neighbours are either retired soldiers or small time farmers and business people.

Many of their children too avail the opportunities of sending their children to our SOS schools where our children freely mix and share life together. The play- ground is jointly shared by the children of the entire neighbourhood.