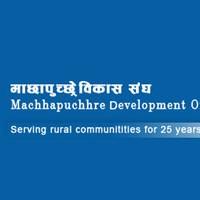 Machhapuchhre Development Organization (MDO) is a non- profit, non-political and non-governmental community-based organization. It works with its key partners-people and their organizations at grass root level to fulfill the objectives of sustainable rconomic and human resources development together with natural resources conservation and cultural revitazation. It is legally registered in district Administration office, Kaski and Social Welfare Council in 1989. MDO has its own by-laws and operates under a governing board of the elected members. The headquarters of MDO is in Tamagi, ward no. 3 in Bhadaure Tamagi Village Development Comminitee (VDC), in Kaski District and rhere is also a liaison office in Pokhara.

MDO project covers Panchase lekh and 13 VDCs of Kaski, Parbat and Syangja districts adjoining it. The area coverage of MDO is more than 400 sq.km. including the Panchase Forest, the homes of several watersheds (river, tributaries and gullies ) that form the major source of the nation’s renowned lake i.e. Phewa tal. Ptential beneficiaries within the MDO area include more than 65,000 people of approximarely 12,000 families.

MDO carries out its projects activities through participatory approach, sharing the prohect cost with the local communities, institutions and the local government authorities. It also seeks to build a strong collaboration with the government. Authorities and national and international NGO’s. its general assembly meeting is held once a year and the membership qualifications are decided according to the by-laws. In addition to the general assembly, MDO has an advisory board comprising members from various disciplines of society.